Docker is, without any doubt, on of the most popular software at the moment, being used by almost every web developer and systems administrator. In this tutorial, we will see how to install it in Ubuntu systems.

For this tutorial, we will use Linux Mint 18 (an Ubuntu based Linux distribution) 64-bit version.

According to Docker documentation, we must meet the following prerequisites for installing Docker:

Want to master Docker?
Subscribe to our newsletter and download the Docker Containerization Cookbook right now!
In order to help you master Docker, we have compiled a kick-ass guide with all the basic concepts of the Docker container system! Besides studying them online you may download the eBook in PDF format!
I agree to the Terms and Privacy Policy
Sign up 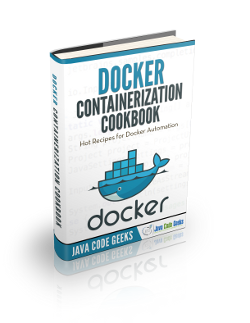 
Just in case, we can check the kernel version with the following command:

Which will show the kernel release. For this case, the output is:

Now, let’s see how we can install it.

We can install Docker simply via apt-get, without the need of adding any repository, just installing the docker.io package:

We can check that Docker has been successfully installed with executing the following:

In this case, the following version has been installed:

We can check if the Docker service was started:

Finally, we can pull an image to check that Docker is working properly. For example, we will pull a BusyBox image:

And it should start to download the layers for the image.

Perhaps you got an error similar to the following:

Warning: failed to get default registry endpoint from daemon (Cannot connect to the Docker daemon. Is the docker daemon running on this host?). Using system default: https://index.docker.io/v1/

Cannot connect to the Docker daemon. Is the docker daemon running on this host?

If you got this error, don’t worry, we will see how to fix it in the following subsection.

Actually, is not an error itself, is just that the user we are trying to execute Docker with, has no permission to access the Docker service.

This means that, if we try the same command with sudo permissions, we won’t get the error:

You will see that the image is being downloaded properly.

If we want to get rid of the sudo permissions for using Docker, we just have to add the user in question to the docker group, created by Docker during the installation. We can check that, effectively, the user we are working with is not in the group:

And we will see that the docker group is not in the list. To add it, we can simply execute:

(The -G option is for secondary groups; and the -a is for appending to the existing ones).

If we check again the groups, we will see that now the docker group is in the list. But, before anything, we have to restart the session, to make the change work.

After re-logging in again, we will see that we can run Docker without the need of root permissions:

Now that we have Docker running, we will see the most basic things we can do with it.

The Docker community is so big. There is a huge number of preconfigured images, many of them maintained by the official developers of the software in question (e.g. MySQL, Nginx, Jenkins, and a large etc.).

These images can be found at Docker Hub. You don’t have to create an account to pull the images from there, but you will need one if you want to host your images.

We already have seen how to pull images. For those official images, we just have to specify the name of the repository:

For images of other users, we have to specify the username:

By default, the latest image in the repository will be pulled (you have probably already the “Using default tag: latest” message if you have pulled the BusyBox image). But we can also pull a specific image, specified by a version tag. For that, we just have to append the tag in question after a colon:

Creating files known as Dockerfiles is the way of creating our custom images, basing on an existing one.

It only consists on writing the steps to execute in a file, like in shell scripts, or scripts for Software Configuration Management tools (Ansible, Chef, etc.).

Let’s suppose that we need a simple Ubuntu image, but for which we will need Nginx. Instead of pulling the Ubuntu image, accessing it via CLI, and installing Nginx, we can write a Dockerfile for being able to build that image just with one command.

We specify the base image with FROM; we optionally set the maintainer of the Dockerfile just in an informative way; we specify the USER used to perform the actions; and we run the commands, setting the Docker DEBIAN_FRONTEND environmental variable to noninteractive, for telling apt-get not to run interactively.

Note that building Dockerfiles can be quite different from just pulling images; this was the most basic example to see how they work.

For building an image from a Dockerfile, we have to execute the build command:

Specifying the path to the Dockerfile. Docker expects a Dockerfile named Dockerfile, so, note that we cannot have more than one Dockerfile in the same directory.

We have seen how to pull images and create our own ones, but not how to use them.

When we use an image, i.e., we instantiate it, we create a container. We can have several containers from the same image. The concept is almost the same as with class and objects in Object Oriented Programming.

For creating containers, we use the run command. The easiest way is to execute it just specifying the image:

Nothing seemed to happen. But, behind the scenes, Docker has created a container from the image, execute it, and then end it, as we didn’t specify nothing to do.

We can execute a command inside the container:

Not very impressive, right? But imagine doing so with a virtual machine, and compare how much time takes each one.

We can also set an interactive shell with -it option:

To see a more complete example, we are going to pull the Nginx image:

And then we are going to run it with the following command:

And, if we follow localhost:8080 in our browser, we will see that we have a dockerized Nginx web server! Running Nginx in a Docker container.

Let’s explain what we have done:

With this example, you already should have noticed the powerfulness of Docker.

Note: to stop a container, we can execute the stop command followed by the container id:

In this tutorial we have seen the installation of Docker in Ubuntu and its very basic configuration. Apart from that, we have also seen the basic usage of Docker, pulling images from the Docker Hub and creating containers from these images.