One of the most expected features of HTML5 was the introduction of the canvas element, allowing to draw graphics on it. This tutorial will show how to draw 3D figures on it, but starting from the very beginning, in order to understand what we are actually doing.

As it is an HTML example, we won’t need any web server or back-end language installed in our machine, just a web browser.


Want to be an HTML5 Ninja?
Subscribe to our newsletter and download the HTML5 Programming Cookbook right now!
In order to get you prepared for your HTML5 development needs, we have compiled numerous recipes to help you kick-start your projects. Besides reading them online you may download the eBook in PDF format!
I agree to the Terms and Privacy Policy
Sign up 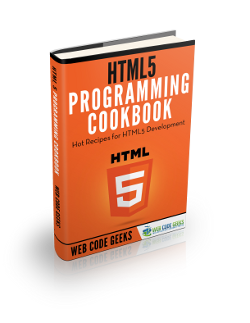 
For this example, the following browsers have been used for testing:

Before diving into the 3D animations, we need to understand the element it relies on: the canvas.

The canvas element was one of the most expected novelties of HTML5. This element allows us to draw dynamically images in a webpage, usually done with JavaScript in combination with the canvas API.

As said, the element we have to use is canvas. So, something like the following would be enough to start:

This will render a white canvas in the browser of 500×300 (with the black border set with the CSS). Nothing very exciting.

But, now that we have our canvas, we can draw on it. Let’s see how to draw some simple rectangles with JavaScript to see the most elemental canvas functions.

PD: do not forget to include the script in the HTML page:

The first thing we do is to bind the piece of code that manipulates the canvas to the DOMContentLoaded listener, since we have to be sure that the elements are loaded before we access them.

Then, we get the canvas object from the DOM. But, for drawing on it, we need to get the render context of the canvas, in this case, still the 2D context. This context offers the method for drawing in the canvas.

The fillRect method fills the canvas from the starting X, Y coordinates, to the ending X, Y ones, with the given color. So, for this instruction:

After that we do the same, but setting a different color for the fill, and for another coordinates.

The result is shown in the following image: 1. Rendering of the canvas of the above code.

After seeing how works the canvas element at it most basic level, it’s time to introduce WebGL.

For the 3D animations with the canvas, we don’t have to get the 3d context, as you may have thought. Instead, we have to get the webgl context, which is supported, at least partially, by every modern web browser (see next image).

WebGL is not just about drawing some specific pixels on a canvas. In order to draw an image, we have to define a spatial vector that represents the image, which will be converted, using the OpenGL specification, to its pixel representation.

This may sound scary, and that’s why we must understand the whole process in order to write WebGL applications.

We have to understand that, when we define figures, we don’t have to think in pixels, but in vector representations in a coordinate system within a cartesian system. Imagine the system like in the image above (that’s actually what we are going to deal with). The drawn point, (x, y, z), is represented by the coordinates in the X, Y and X axes.

Now let’s suppose that we want to build a cube, and that the coordinates commented above are for one of the bounds of the WebGL system. That coordinate would be (1, 1, 1). That means that we have just one of the corners of the cube, and a cube has 8 corners. So we need several more coordinates.

This might be easier to understand in the second dimension, just with the X and Y axes, where the underlying principle is the same. Suppose three coordinates, e.g. (0.8, 0), (0, 1) and (1, 0.8). With this vortexes, we would draw a triangle like in the following image. As said, the principle is the same as for the three-dimensional figures with a third axis, but easier to understand if the previous example was confusing.

The shaders are pieces of code that are executed in the GPU for representing each pixel that will make up the final scene. There are two types of shaders:

Note: these pieces of code are not written in JavaScript, but in script type known as x-shader/x-vertex. We will see it later.

Knowing that there are some browsers with just partial support, we should implement a fallback for the browser that do not offer full support. This is actually very easy. The following script will tell us if our browser is compatibly or not with WebGL:

As you can see, it’s almost as same as with the 2D context. But, in this case we try to get the main WebGL, or, the experimental one, if the first one fails (i.e. returns false). After, we check if the experimental WebGL retrieval also failed, checking also that effectively the returned object is an instance of the WebGLRenderingContext.

Yes, we have already seen how to draw in 2 dimensions, but that was with a different context, with the aim of understanding the basics of the canvas element.

The previous obvious step to the 3rd dimension, is the 2nd one. Starting directly drawing in 3D, may result in not actually understanding the functioning of the WebGL.

So, let’s draw a triangle as in the previous picture. 5. Drawing with WebGL the triangle shown in the previous picture.

The following code will show our script at the higher level, just showing the functions we have created for rendering the figure.

As you can see, we have just: defined the vortexes of the triangle (the same values as used for the picture of the previous section), init the WebGL, create the vertex and fragment shaders, create the shader “program” from the shaders, set the specified coordinates, and draw the arrays.

So, the full script would be:

Remember that we told before that the shaders were pieces that have to be compiled. Note that, in the code above, we haven’t defined fragmentCode (line 44) nor vertexCode (line 57). These are the pieces of code for the fragment, which we defined in separated files:

PD: don’t forget to add the code to the HTML page:

Wow, that was to much code for drawing a simple triangle, wasn’t it? Imagine for an animated 3D figure…

Fortunately, for doing this, we will use a library that will make our lives easier.

We have seen how to deal with WebGL at the lowest level. And perhaps, we got disappointed: too much work, too much code, for the simplest task.

As already commented, fortunately, there are libraries available for drawing 3D figures that will save much time, besides being easier. Probably the most known is three.js, which its simplicity is fascinating, more after dealing with native WebGL.

For using it, we just have to download the latest minified build (more than 500kb!). For this case, the version r84 has been used.

Before seeing the code, let’s see what we are going to achieve. We will draw a 3D cube, which will rotate in both X and Y axes. The following image shows it, statically, but it will actually rotate! We will work in the same codebase. Just don’t forget to include the three.js library. The code for drawing the previous animated cube is the following:

Creating the cube (line 15) is so simple. We just create an arraywhere we define each side (6 in total), specifying the material of each side, and the color of it.

The function in line 33. For starting the scene, we also have to set the render and the camera.

For the render, we instantiate the THREE.WebGLRenderer class, set a clear color (black), define its dimensions (which are already defined in the canvas element in the HTML), and append it as a child to the canvas.

For the camera, in this case, we instantiate the THREE.PerspectiveCamera class, passing 2 parameters:

In this tutorial we have seen how to draw a 3D image (that also rotates), using the HTML5 canvas element and the three.js library, but, also seeing how to create graphics from the scratch, fundamental for understanding how does the WebGL and canvas work.

This was a tutorial of HTML5 3D canvas.